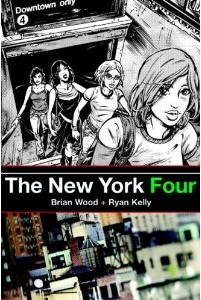 Maybe HBO will pick it up for a series in two decades or so...
Riley: New York City— it awes me into silence sometimes... And it makes me want to shout out at the top of my lungs. Is there any place better?
Advertisement:

The New York Four is a graphic novel by writer Brian Wood, and artist Ryan Kelly, published in 2008 by Minxnote A short-lived DC imprint that focused on creating graphic novel series aimed at the teen girl shoujo manga audience.

The book follows four girls, Riley Wilder, Merissa Vasquez, Lona Lo, and Ren Severin, as they traverse through everyday college life in New York City. Riley, is our tour guide, if you will, since it's through her eyes that we get to experience what's happening.

There's also a small number of hints and tips, subtitled: NY 101, scattered around the book, through which we get useful advice, or interesting hangout spot suggestions, and sometimes even historical facts, about the city.

A sequel titled: The New York Five, was published by Vertigo in 2011.