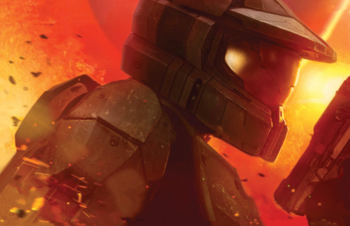 Halo: Oblivion is the 29th novel in the Halo series. It is a direct sequel to Halo: Silent Storm, and is once again written by returning author Troy Denning for his fourth Halo book.

It is a year after humanity's first contact with the Covenant, and several weeks after Operation: SILENT STORM, one of the UNSC's first major successes of the war. The Spartan-II's have proven themselves as the UNSC's best hope against the Covenant onslaught, and are directed towards the planet of Netherop, whose brutal atmospheric conditions render the world inhospitable. A Covenant frigate, codenamed the Lucky Break, has been downed on the planet, and despite the many risks involved the Spartans are tasked with salvaging the vessel in search of valuable technology and intelligence. On the other side of the war, Sangheili Shipmaster Nizat 'Kvarosee has been disgraced by his failure to prevent the UNSC's first major strategic victory, and is given one last chance at redemption: He must land a crushing blow against the Spartan II's while under the surveillance of the Silent Shadow, a team of assassins who will execute him at the first sign of failure. With the race on to secure the Lucky Break, the Spartans must endure both their environment and a Covenant force desperate for salvation, all the while Netherop may not be as inhabitable as it seems.