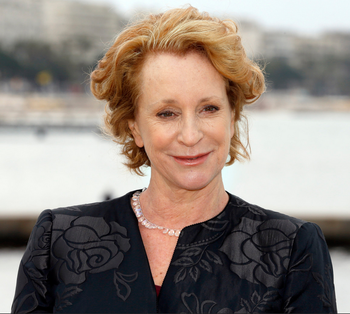 Philippa Gregory is a British, CBE (born January 9, 1954 in Kenya) is a British Historical Fiction writer.

She has written about a range of periods in British history but is best known for her Tudor novels - mostly The Other Boleyn Girl, the success of which led to two film adaptations, a resurgent interest in the Tudors, and a flood of Follow the Leader novels about women of the period. More recently she has been writing the bestselling Cousins' War series, which follows the fortunes of various important women in the preceding historical period, the Wars of the Roses.

Gregory is widely regarded as a decent historian who does her research thoroughly, but her books do frequently diverge from fact, most famously in The Other Boleyn Girl's depiction of Mary Boleyn as a naïve ingénue seduced by the king, when in reality she was not only married but had previously spent some time as the mistress of the King of France. She has, however, eschewed the Dan Brown route, being careful not to claim that her books are totally accurate and open about the fact that she is a fiction writer who will often make things up. That said, it is very important to remember that though Gregory may use the term "historian" to describe herself, her PhD is in Eighteenth Century Literature, not history. She's not exactly the type of person you should cite in a history paper.

Works based of Gregory's works