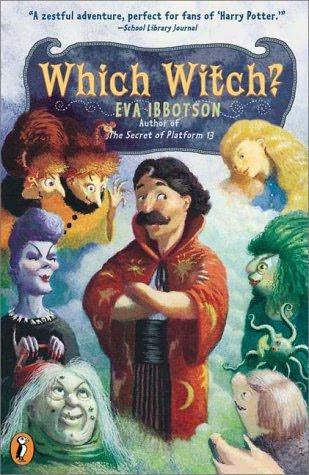 Which Witch? is a 1979 children's fantasy novel by Eva Ibbotson.

Arriman Canker, otherwise known as Arriman the Awful, Loather of Light and Wizard of the North, is getting worried. He's starting to get up there in years, and has no black wizard to pass his legacy on to. A no-nonsense fortune teller insists that one with even more potential than Arriman is on the way, but there's no sign of him ever making an appearance. Thus, though he's not too keen on the idea, Arriman decides to marry a black witch so that he can produce an heir the old-fashioned way.

Of the witches in the area, the pickings are slim. His options are Mabel Wrack (the daughter of a mermaid-turned-human), eternally bickering twins Nancy and Nora Shouter, the uncouth Ethel Feedbag, the ever-befuddled Mother Bloodworth, sinister Madame Olympia, and sweet Belladonna. To choose, Arriman proposes a contest for them: they must all perform acts of black magic for him, and whoever does the most evil thing will be his wife.

Meanwhile, for Belladonna, it's Love at First Sight when she sees Arriman. She's determined to win at all costs, but there's a minor setback: she's not a dark witch at all. In fact, she's a white witch, who can only perform good magic. But luck seems on her side when she meets an orphan boy named Terrence Mugg, whose pet worm, Rover, appears to be Belladonna's familiar, capable of giving her dark magic. With Terrence and Rover on her side, Belladonna is certain to win. But will she come out on top, when one of the group resorts to underhanded methods to win?