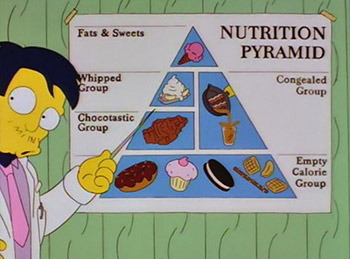 A chocolate ice cream with fudge and whipped cream would fit in all five categories...
Advertisement:

A classification is made that doesn't make any sense at all. The categories overlap, are on different levels of abstraction, or something along those lines.

Usually Played for Laughs or as Sarcasm Mode, but it can also be Played for Drama as a tool for showing that a character is high, a Cloud Cuckoolander, or has gone insane.

Note that for a classification to be this trope, the division must be nonsense in itself. A valid division presented in a humorous way is something else, for example Gratuitous Latin.

Likewise, a classification with heavy Unfortunate Implications of Fantastic Racism or similar (such as All Gays Are Pedophiles or Aliens Are Bastards) is another kind of nonsense - not this trope. Same goes for sets of food groups that are merely unhealthy or alien. While a nonsense classification of food groups is likely to also be unhealthy or alien, the thing that makes it this trope is that the categories overlap, mix levels, or similar.