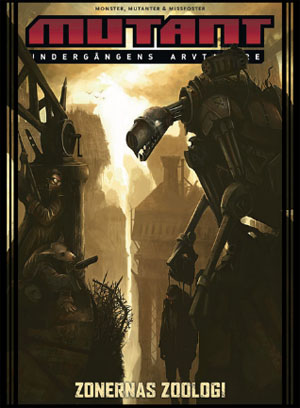 Two adventurers trying to save their comrade from one of the Eldritch Abominations left by the Precursors.
Advertisement:

Mutant: Undergångens Arvtagare, otherwise called Mutant - Heirs of the Apocalypse in English, is a Swedish tabletop RPG. The world ended over a millennium ago, and a new world has grown in the ruins.

Players have four classes to chose between: Human, Mutant, Psionic, and Robot. (While most games classify such options as races, in this game they are labeled classes.) Mutants and psionics can be either human or Half-Human Hybrid. The human versions can often pretend to be real humans, but risk getting exposed. The hybrids have a more stable social status.

Humans are the aristocracy of the local empires, the inheritors of those who rose from their underground bunkers so long ago and re-conquered the world. Their technology has withered away since, but they still cling on to their former glory. Human characters are given a lot of social advantages from the start; a poor outsider human still has a far greater chance to establish herself in society than a mutant.

Mutants have physical superpowers, but are more specialized than humans. They are also socially repressed.

Psionics have mental superpowers, but are persecuted.

Robots have special rules and powers, but also lots of disanvantages including dubious social standing.

The game world is centered on Pyrisamfundet, taking up the middle of what used to be Sweden. Other important nations are Ulvriket, Gotland, and the city-state of Göborg.

These countries control their cities somewhat well. The countryside is less lawful, and the "forbidden zones" are entirely outside government control. These zones are dangerous in various ways. One zone causes madness in those who enter, another is full of aggressively growing crystals, and so on.

See also Mutant Chronicles, which is set in space, and Mutant: Year Zero set closer to the apocalypse.