Recap / Star Trek: The Next Generation S3E5 "The Bonding" 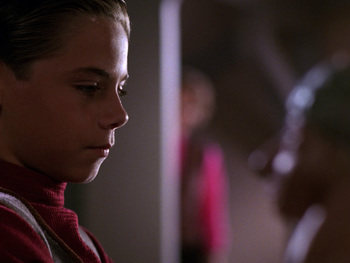 This is Jeremy Aster. He's just been orphaned, and he has to learn to deal with it... unless that figure in the background has anything to say about it.

The Enterprise is investigating a planet whose civilization killed itself off in a brutal war long ago. An away team led by Worf investigates some ruins, but the mission turns deadly when a hidden bomb goes off, wounding Worf and killing Lt. Marla Aster. Aster leaves behind a twelve-year-old son, Jeremy, whose father, another Starfleet officer, had also died in the line of duty some time ago.

Picard sends La Forge with another away team to the planet to investigate what happened. Worf offers to inform Jeremy of the loss, but Picard and Troi go instead. Jeremy reacts to the news with a bit of stoicism, reflecting that he's all alone now; Picard reminds him that on the Enterprise, no one is ever really alone.

Several of the crew have different reactions to Lt. Aster's death. Wesley can empathize with how Jeremy must be feeling due to the loss of his own father. Data, meanwhile, is confused by the crew's reaction to Marla's death and asks Riker for guidance. Worf, himself an orphan, expresses to Troi his desire to perform a Klingon bonding ritual with Jeremy. Troi is hesitant to approve of the idea, however, as she feels Jeremy still needs time to grieve.

Data reports an odd energy buildup from the planet, which reaches out and touches the ship, but appears to be harmless. As Jeremy sits alone in his quarters watching old videos of his family, he is surprised by the sudden appearance of his mother, apparently alive!

Marla tells Jeremy that the crew "made a mistake," and that she's alive and well, but now she wants to take Jeremy to the planet, where they will live in a house like they used to. At that moment, Worf shows up to check in on Jeremy, and he sounds the alert. When Picard intervenes and prevents them from beaming down, "Marla's" disappearance only serves to confuse Jeremy.

Troi attempts to comfort Jeremy, but "Marla" soon reappears, turning their quarters into a replica of the house they lived in on Earth. The entity posing as Marla doesn't understand why the crew resists letting Jeremy go to the planet, as all "she" wants to do is make him happy. Meanwhile, La Forge has reported that the remaining bombs were found having been uprooted and deactivated. When the crew come to realize they can't keep "Marla" off the ship for long, they shut down the transporters so that Jeremy can't be beamed down.

Picard confronts the entity, and "she" reveals that there were once two races of beings on the planet below: the physical beings wiped themselves out, and the energy beings left behind vowed never to let that conflict hurt another person. As a result, they feel responsible for Marla's death, having overlooked the bombs left behind, and they were responsible for deactivating the rest. To make up for Jeremy's loss, they want to take him down to the planet to raise him.

Picard, with the help of his crew, explain that humans must learn to deal with their loss in their own way, and that the aliens aren't equipped to provide Jeremy with a future, only his past. Wesley and Worf explain their own experiences with losing parents; Wesley reveals for the first time that he hated Picard for a long time after his father's death, but he no longer feels that way. Worf then formally offers to perform the bonding ritual with Jeremy. Finally realizing that Jeremy is in good hands, the entity returns to the planet.

Later, Worf and Jeremy complete the ceremony, uniting them as brothers.