Recap / Star Trek: The Next Generation S1E20 "The Arsenal of Freedom" 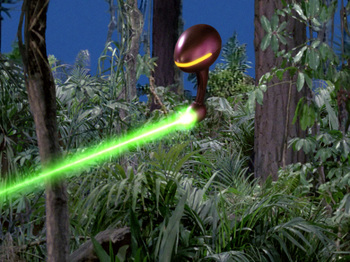 The Enterprise is in search of the Drake, a light cruiser that vanished near the uninhabited planet Minos. Upon arriving, the crew encounter an automated sales pitch for weapons and learn that the previous inhabitants of Minos were arms dealers.

An away team encounters Captain Rice of the Drake on the planet, but Riker quickly realizes that Rice is an imposter, and there are no life signs on the planets except the away team themselves. Rice reveals that he is just a hologram created by a floating sentry drone, which fires a stasis field around Riker. Picard and Crusher beam down to the planet, but get trapped in a pit as increasingly deadly drones continue to attack the remaining away team.

Meanwhile, the Enterprise is attacked by another factor of the planet's defense system while Geordi is left in charge. Geordi fends off attempts by the Chief Engineer to assume command as he struggles to decide whether to risk the whole ship to save the away team or abandon them and flee to safety. Geordi eventually separates the saucer section so that the majority of the ship's crew can stay safe while the rest engage in a risky maneuver to defeat their attacker. The ploy works.

On the planet, the away team realizes that the next drone attack will probably be their last. In the pit, Picard discovers the computer that operates the sales hologram and learns that the attacks on his ship and crew are all part of a sales demonstration. He agrees to buy the weapons system, and the demonstration ends. The reunited away team beams back aboard the Enterprise, and Picard allows Geordi to stay in command until the saucer section is reattached.