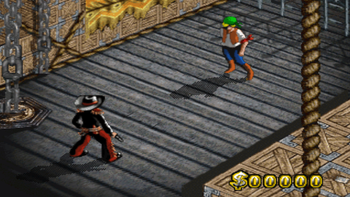 The player (left) going up against Bill (right).
"What the fuck is Link doing in this?"
— Vinny, Vinesauce
Advertisement:

West Cowboy is a Chinese cowboy video game made in the 2000's. The game was originally released on Shoddy Knockoff Products of the Nintendo Wii, but it was later made into an Android game credited to senca.

You are an unnamed Western cowboy who's set out to kill other wanted cowboys. You can shoot your gun and lean left and right to dodge incoming bullets; the opponents can do the same. It takes only one shot to defeat an opponent and continue to the next level, but if an opponent shoots you even once, it's Game Over.

You encounter a few different cowboys throughout the game. You first fight Bill, an expy of Link fought in an old warehouse. Then you fight Hasih, a normal cowboy in another old warehouse. After that, you fight Larisa, a cowboy who's out in the street between houses. Then you fight a widely-known Real Life person (we won't spoil their name) who's depicted with a rocket launcher in this game. You fight them out in the streets with trees and buildings nearby. After that, you fight duplicates of those cowboys with multiple cowboys attacking you at once.

The game's pretty obscure. The only reason anyone knows about it is because of a Vinesauce video where Vinny plays the Plug N Play Game version and tries to defeat the opponent of level 4.

At some point, the Android version was removed from the Play Store, but copies still exist.