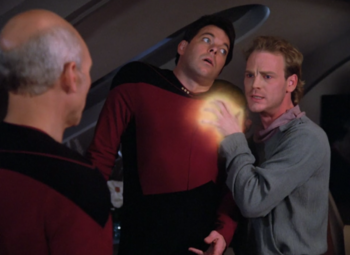 "If you don't give me my medicine, I'll use my glowey hand to zap him!"
Advertisement:

Picard tries to mediate a trade dispute between two neighboring planets, one of which is the sole supplier of a drug to treat the other's apparently fatal disease. However, the drug turns out to be an addicting narcotic, and Dr. Crusher is torn on whether to offer help to the people suffering from withdrawal symptoms or follow the Prime Directive and not get involved.

Perhaps best-known in retrospect for the extensive behind-the-scenes feature that LeVar Burton did for an episode of Reading Rainbow.