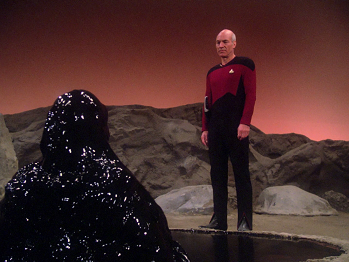 "I do not serve things evil, I am evil."
Advertisement:

The first pivotal episode of Star Trek: The Next Generation. An evil, tar-like creature holds Troi hostage on an alien world. During the rescue mission, one of the Enterprise crew is killed. It's Tasha.