Recap / Star Trek: The Next Generation S2E9 "The Measure of a Man" 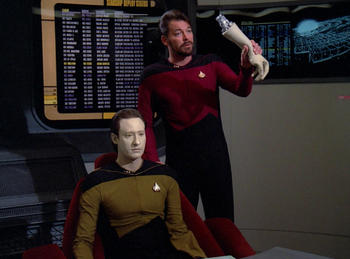 "Its a collection of neural nets and heuristic algorithms. Its responses dictated by an elaborate software program written by a man. Its hardware built by a man.

And now... and now a man will shut it off."
"The ultimate measure of a man is not where he stands in moments of comfort and convenience, but where he stands at times of challenge and controversy."
—Martin Luther King, Jr.
Advertisement:

The Enterprise is parked at a newly established starbase for crew rotation and resupplying/offloading. Data gets his first taste of poker (which he fails at, due to Riker's impenetrable bluff), while Picard meets and catches up with an old friend/foil of his, Captain Phillipa Louvois, currently assigned as a JAG officer on the station. They immediately bleed out some bad blood and Belligerent Sexual Tension between them. It seems that Louvois was Picard's love interest before she tore him apart during the court martial hearing held for him losing his previous command. They're interrupted by a Starfleet admiral and a Commander Maddox, who has some history of his own with Data.

Maddox was the only member of a Starfleet board to oppose Data's admission, out of his insistence that robots aren't alive. However, now he's interested in learning Data's secrets, determined to use him as a template to build more androids like him for manual labor and use in dangerous situations. Picard and Data are intrigued by Maddox's work, but once Maddox explains his plans in detail, they realize that his understanding of cybernetics is still spotty, and his plans will likely kill Data. Picard refuses to allow it, but Maddox is prepared for this eventuality and whips up transfer orders that go beyond Picard's ability to refuse.

Forced to choose between Starfleet and his life, Data reluctantly chooses to resign. The bridge crew throw a going-away party, and Geordi takes Data's departure particularly hard. But before Data can leave, Maddox argues that Data is property of Starfleet and therefore doesn't even have the ability to resign. Louvois reviews his case and agrees with him, but Picard lodges an official complaint, forcing Louvois to hold a summary trial. Because she has no staff yet, Picard will take charge of Data's defense. Louvois forces Riker against his strong objection to to play prosecutor, warning him that she will dissolve the trial and uphold her original ruling if Riker sandbags his prosecution.

Riker reluctantly but effectively presents his case by proving that Data is a man-made machine with a computer for a brain, robot limbs, and an off button. The display of Data's inhumanity proves very persuasive and leaves Picard calling for a recess to regroup. He confides in Guinan, who notes that if Maddox gets his way, it will certainly benefit the Federation to have thousands of new Datas as a subservient worker race. Picard realizes that she's effectively describing slavery. He leaves with a new strategy.

In court, Picard dismisses Riker's arguments about the properties of Data's physical construction as irrelevant. He goes on to argue that Data does have sentience by Maddox's own definitions. Sentience makes Data a legal person who thus cannot be property. Further, he argues that creating a legion of Datas for use as a labor force would be tantamount to Federation-sanctioned slavery, a profound affront to its most basic ideals. Convinced, Louvois decides to rule in favor of Data. Free to choose his own destiny, Data remains in Starfleet and officially refuses to participate in the procedure. Now questioning his beliefs, Maddox rescinds Data's transfer and allows him to return to the Enterprise. Data encourages him to continue his work. Back onboard the ship, Data alleviates Riker's guilt for his part in the trial by noting that Riker only did what he had to do to ensure that Data got the chance to achieve his freedom.