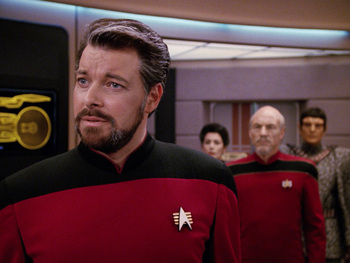 Riker's not the only one Growing the Beard.

Riker's birthday party is cut short when the Enterprise finds some unusual readings from an uninhabited M-Class planet near the Neutral Zone, which the crew believes could be indicative of a Romulan secret base. Riker is sent to lead an away team, which arrives at a cave that suddenly starts filling up with methane gas. The team falls unconscious and is beamed up, with some difficulty.

Riker awakens in Sickbay and notices that both Dr. Crusher and himself look considerably older. When Riker mentions the mission, Crusher explains that during said mission, Riker contracted an alien virus that remained dormant for years, but which has suddenly became active and put him into a coma, erasing all his memories since the moment of infection: sixteen years have passed since the mission and Riker has been captain of the Enterprise for nine, none of which he remembers. Dr. Crusher sadly informs him that while there is a chance for his memories to return, the damage is likely permanent.

Riker tours the Enterprise with Dr. Crusher and finds a number of changes: Geordi's VISOR is gone, replaced with cloned eyeballs; Worf now has a battle scar on his face, and sits in Data's position at Ops; the helmsman is a Ferengi, and Data is now First Officer. Suddenly a Romulan Warbird de-cloaks and Riker orders a Red Alert, only to be informed they were expecting the ship. The Warbird hails the Enterprise and Riker is greeted by none other than Picard, now an Admiral with Troi as his assistant. They beam aboard and bring Riker up to speed: 4 years ago, Riker and the Enterprise rescued a damaged Romulan ship, which impressed the Romulans and finally prompted them to start peace negotiations, of which Riker was a key part. The negotiations are in their final stage, and Riker is expected to continue to represent the Federation as the last issues are hammered out and the treaty is signed. Riker doesn't feel like he's in any condition to perform negotiations, but Picard trusts his ability. Troi leads Riker to his quarters—where he finds a ten-year-old boy who calls Riker "dad." Riker is understandably shocked.

The boy, Jean-Luc, asks Riker for some details involving a past Enterprise mission, and finally realizes his father doesn't remember him. Troi asks Jean-Luc to leave and Riker understandably asks why he wasn't informed of this. Apparently Dr. Crusher thought the shock would help to recover some memories, but it didn't. Riker asks about the boy's mother and Troi sadly tells him that "Min," who served as the ship's counselor after Troi's departure, was killed in a shuttle accident two years ago. At Troi's advice, Riker spends some time bonding with Jean-Luc, which they both enjoy. Riker tries to look up his service records, but the computer seems to be having difficulty bringing them up. The ships systems have been acting laggy ever since Riker woke up, prompting Geordi to run a diagnostic. Riker is interrupted by news that the Romulan Ambassador has arrived and goes to greet him—and is stunned to find that it's the Enterprise’s old enemy Commander Tomalak. The now-Ambassador Tomalak knows of Riker's condition and is understanding of his concerns, but claims he is a changed man. Riker is also apprehensive of the fact that negotiations will be held at Outpost 23, the key to all Neutral Zone defenses. Picard informs him that Outpost 23 hasn't been strategically important in years and there is no cause for concern.

Riker is contacted with news that Jean-Luc has injured himself and rushes to see him. Riker spends more time with Jean-Luc, claiming that when he was Jean-Luc's age his own father was absent and he doesn't want to make the same mistake. After going on a fishing trip on the holodeck, Riker tries to find records of his deceased wife. Again the computer is having problems, but Jean-Luc helps him. In a family video, Riker sees "Min" for the first time... and realizes that she's actually Minuet. Riker has a Eureka Moment and goes to the bridge.

An agitated Riker walks around the bridge asking rapid fire questions: why is Geordi taking so long to do a basic diagnostic? No answer. Where did Worf get the scar? What battle, what unit, what sector? No response. Why can't Data quickly solve a bunch of calculations despite his advanced brain? And did Data just use a contraction? Riker demands the end of this "charade"... and the bridge fades away to reveal a Romulan holodeck, with only Tomalak remaining.

Commander Tomalak explains the obvious to his prisoner: using neural scanners and a holodeck, they created a Faked Rip Van Winkle for Riker, hoping to gain the location of Outpost 23. Tomalak asks what gave away the false Enterprise. Riker responds that it was the computer lag (which was due to the limited response time of the scanners), and more importantly, the presence of Minuet as his "wife." Minuet, if you recall "11001001", was a mere Holodeck program, albeit one for which Riker had such feelings that the scanners had mistaken it for true love. Riker then asks why they didn't just pull the location of Outpost 23 directly from his mind, not buying Tomalak's explanation of "gaps" in his memory since the recreation of the Enterprise was otherwise pitch perfect. Tomalak orders Riker to be sent to a cell.

In the cell is a boy who looks exactly like Jean-Luc. As Tomalak explains, his likeness was used to create Riker's fake son. After Tomalak leaves, the boy introduces himself as Ethan, and claims he and his parents were living in a new research station near the Neutral Zone and were captured by the Romulans. After Tomalak returns, they manage to make a break for it and hide in a special place Ethan found where their captor's sensors are blocked. Riker discusses getting to the communications room and contacting the Enterprise, but Ethan claims it's impossible since the security system only responds to Ambassador Tomalak's voice. Riker realizes he's being tricked again: Tomalak was never called "Ambassador" outside the Holodeck he was just in. The Romulans show up again, despite the room being sensor-immune. This prompts Riker to throw away his weapon and claim, "I don't want to play anymore." As the Romulans prepare to fire, the Romulan base fades away...

... revealing the cave from the beginning of the episode, where Riker and "Ethan" stand alone. Riker is contacted by the Enterprise; Picard tells him he was lost mid-transport, and it's only been an hour or so. Riker confronts Jean-Luc/Ethan about why he did this. He explains that his planet was invaded and his people were killed but his mother, who also died in the invasion, placed him in this advanced holodeck to keep him safe. The neural scanners gave him everything he ever wanted... except real friends. Riker then invites him to join them on the Enterprise so he will never be lonely again. Jean-Luc/Ethan then changes to his true Grey Alien-like form. He says his real name is Barash... and Riker replies "To me, you'll always be Jean-Luc." And then he is never seen again.