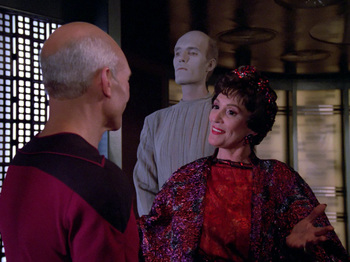 The first appearance of Lwaxana Troi, Daughter of the Fifth House, Holder of the Sacred Chalice of Rixx and Heir to the Holy Rings of Betazed. Oh, and Homn.
Advertisement:

Lwaxana Troi visits her daughter, Counselor Deanna Troi, and prepares her for an arranged marriage. Meanwhile, a ship carrying diseased aliens is approaching the utopian planet Haven around which the Enterprise is in orbit. The two events are actually connected.