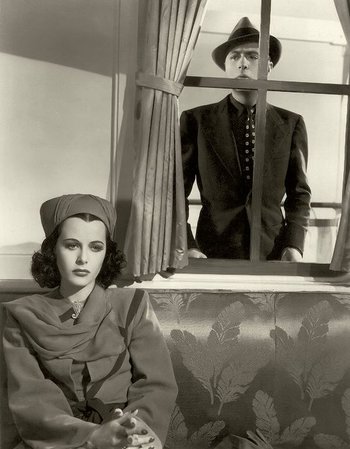 The film is set in—guess where?—yep, Algeria, during the time when it was ruled by France. Pepe le Moko (Boyer) is a notorious jewel thief who has absconded to the capital of French Algeria. French authorities are perfectly aware that Pepe is in the city, but they can't touch him because he is secure in the "Casbah

", the walled native quarter where French law counts for nothing and the police are powerless. Inspector Slimane, the local detective who is responsible for Pepe, goes so far as to enter the Casbah from time to time for friendly chats with Pepe.

However, all is not as well as it seems with Pepe. He chafes at confinement within the Casbah and longs to escape and return to his native Paris, but he knows that once he leaves the Casbah he'll be arrested. Into this mix comes Gaby (Lamarr), the gorgeous young fiancée of a fat American businessman. Pepe and Gaby soon fall in love. It soon becomes clear that the crafty Inspector Slimane plans to use Pepe's love for Gaby as a means to lure him out of the Casbah.

A remake of the French film Pépé le Moko, starring Jean Gabin, which was released just the year before. Star-Making Role for Hedy Lamarr in America. The look of this film and the general idea of a Mediterranean town with narrow, winding streets, filled with crooks and schemers, proved very influential in the making of Casablanca. The line "Come with mee to ze Casbah", said by Charles Boyer in the trailer but not in the film, became strongly associated with him anyway. Additionally, Charles Boyer's performance in this film would inspire cartoon character Pepé Le Pew. There was a musical remake of this film in 1948 entitled Casbah, with Peter Lorre, Yvonne De Carlo, and Tony Martin.

Not to be confused with The Battle of Algiers.