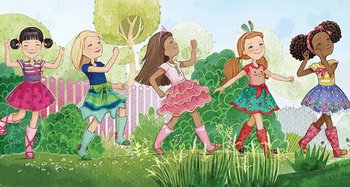 A spinoff of the American Girl line, the WellieWishers are a line of characters released by American Girl in 2016. Unlike the main American Girls (that are characterized between eight and twelve) the line—named after wellies (a term for Wellington boots/rubber rain boots that was popularized in the United Kingdom)—focuses on five elementary-aged characters and is designated to cover the gap left between the Bitty Baby infant baby dolls and the older aged American Girls.

The line focuses on five main characters (of different ethnicties) who spend time together playing and learning in an open garden:

The collection is accompanied by a series of illustrated early-reader chapter books, with realistic problems, scenarios, and lessons for elementary aged kids. Each book also includes a section for parents on how to apply the lessons and/or activities in the book. There is also an animated series on Amazon Prime.

The WellieWishers franchise provides examples of: