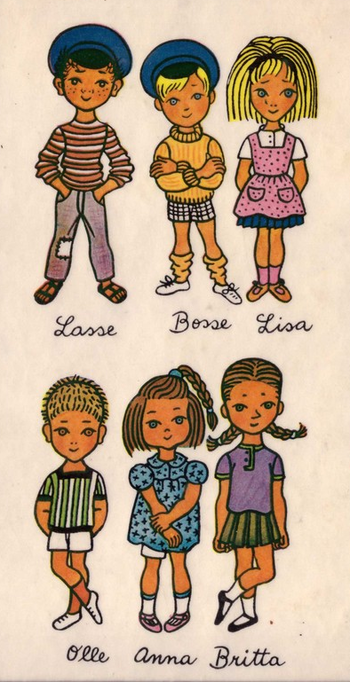 The Six Bullerby Children (also known as The Children of the Noisy Village) is a book for children written by Astrid Lindgren. It's a set of stories about idyllic life and small adventures of six children who live in rural Sweden in the very small and remote village of Bullerby (Bullerbyn in Swedish). It was originally published in 1947 in Sweden. It has since been translated into many languages and published in many countries.

The village consists of only three lined up houses in which live six children with their parents and hired help. The book is narrated by a girl Lisa who has two slightly older brothers Lasse and Bosse. She's best friends with Anna and Britta, two sisters who live in the neighbouring house. Olle is an only child from another neighbouring house though later he "gets" a little sister Kerstin. The children, especially the boys, are often mischievous and there is some friendly rivalry between the boys and the girls.

All the children have loving parents. Anna and Britta have a kind old grandpa who plays grandpa for all the kids from Bullerby. The children go to school in Storby and they have a good and nice teacher. They are on friendly terms with their hired help. The children sometimes visit Kristin, an old woman who lives alone, and they sometimes cross paths with an evil shoe-maker. The families do some agriculture work and the children often help working in the fields or taking care of their animals. They play in their gardens, in woods and mountains, by the lake or on small islands and other exciting places. They often build little dens and hideaways and play games. There are lots of holiday-themed chapters with parties and celebrations as they celebrate birthdays, Easter, end of school and beginning of the summer holidays, summer solstice, Christmas or New Year's Eve.

Bullerby(n) is identical with a small village called Sevedstorp where Lindgren's father grew up. The book gave name to "Bullerby Syndrome", which is a term referring to an idealization of Sweden. It consists of a stereotypical image of Sweden with positive associations, including easy and simple life, happy communities, wooden houses, nature untouched by mankind, clear lakes, green forests, frosty winters and midsummer sunshine.