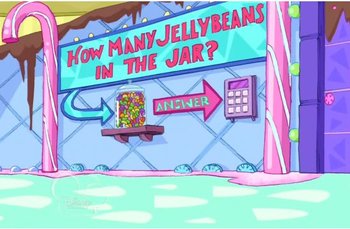 You can try complicated math...or you can just empty the jar.
A once-common contest at fairs, fundraisers, and math classes taught by a Cool Teacher. The premise is simple; guess the number of jellybeans in a jar, and win a prize, often the jar of jellybeans itself.
Advertisement:

There are multiple ways of coming to the solution, such as blind guessing, getting an identical jar and counting how many jellybeans it takes to fill that up, or using math to determine the jar's volume and the volume of a single jellybean. In the world of fiction, it's a good premise for an episode, or at the very least, a gag, wherein the characters try to figure out the central question.

"How many jellybeans (or whatever the item is) are in the jar?"

Which is better, complex math or just eating whole?

Which is better, complex math or just eating whole?