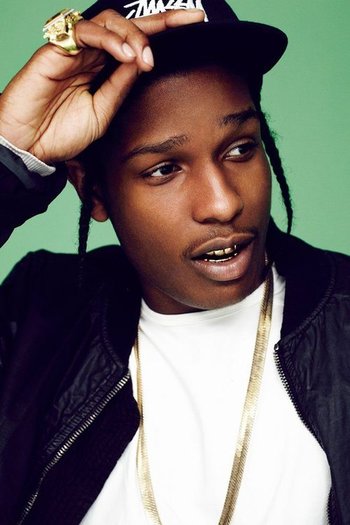 I be that pretty motherfucker, Harlem's what I'm reppin

Rakim Athelaston Mayers (born October 3, 1988), better known as A$AP Rocky, is a popular American rapper, singer, songwriter, record producer, model, actor, and music video director from Harlem, New York City. He is the best-known member of the collective A$AP Mob, and has been a major fixture in Swag Rap since he began achieving mainstream exposure in 2011.

A$AP Rocky is known for his laid-back, smooth delivery, excellent beat choices, and unique fashion sense. His music is considered a fusion of Dirty South rap such as UGK and Three 6 Mafia and native New York-based artists like Dipset and Wu-Tang Clan. To date, he has released one major mixtape(LIVE.LOVE.A$AP, 2011) and three major label albums (LONG.LIVE.A$AP, 2013; AT.LONG.LAST.A$AP, 2015; and Testing, 2018), with the first two especially being critically acclaimed and commercially successful. He is expecting a child from Rihanna, who is due June 2022.

Not to be confused with alt-rapper Aesop Rock. And yes — they have met