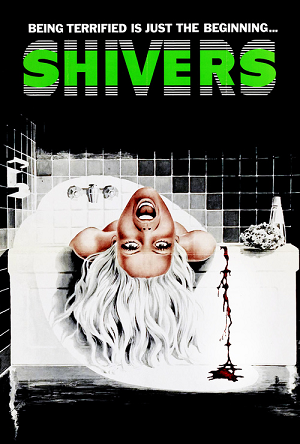 Shivers (also known as The Parasite Murders, They Came from Within, and Frissons) is a 1975 Canadian horror film written and directed by David Cronenberg. His feature film debut, it embodies many of the Body Horror concepts he would continue to explore in future films with a wide spectrum of subtlety. It stars Fred Doederlin, Paul Hampton, and Lynn Lowry.

In Montreal, Dr. Emil Hobbes has spent his career developing parasites for use in organ transplants. Believing that humanity has become over-rational and has lost contact with its more primal urges, he creates an organism that acts as a combination of aphrodisiac and venereal disease. As a result, everyone with the parasite is consumed by uncontrollable sexual urges, causing the parasite to spread via the slightest sexual contact. When the parasite inevitably gets free, it soon infects a luxury apartment building.

This being a Cronenberg film, you know things are going to get gross in a hurry.