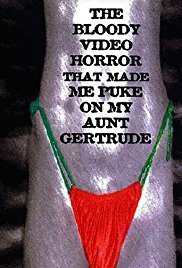 The Bloody Video Horror That Made Me Puke on My Aunt Gertrude is a 1989 American horror film.

A guy rents some equipment from a video store for one thing and one thing only: Making snuff films! He returns the equipment on time and it looks like he's gonna get away scot-free. However, there's one problem: He left the tape in the camera. Now, he has to go on a quest to get it back, and kill anybody who stands in his way.