Film / Blossoms in the Dust 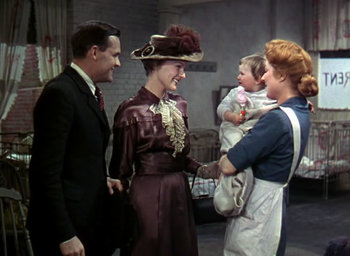 Blossoms in the Dust is a 1941 film directed by Mervyn LeRoy, starring Greer Garson.

It is a Bio Pic of Edna Gladney, a Real Life advocate for orphans and "illegitimate" children. The story opens with Edna Kahly as the daughter of a wealthy Wisconsin family. Edna has an adopted sister, Charlotte, who was a Doorstop Baby taken in by the Kahlys many years ago. Charlotte's impending marriage to a nice young local man is disrupted when her fiancé's parents discover her illegitimacy. Charlotte promptly kills herself.

Edna marries Sam Gladney (Walter Pidgeon), a well-to-do wheat farmer from Texas, and they have a son. But tragedy strikes when the boy is killed in a carriage accident. Edna, unable to have any more children, dedicates herself to taking care of orphans. She founds an orphanage dedicated to pairing off children with adoptive parents and fights obstructive bureaucrats who try to shut her down. When Edna is further reminded of the stigma of illegitimacy, she campaigns to have the designation "illegitimate" removed from Texas birth certificates.

First of eight films to pair Garson with Walter Pidgeon, including the next year's Oscar winner, Mrs. Miniver.