Film / A Bucket of Blood 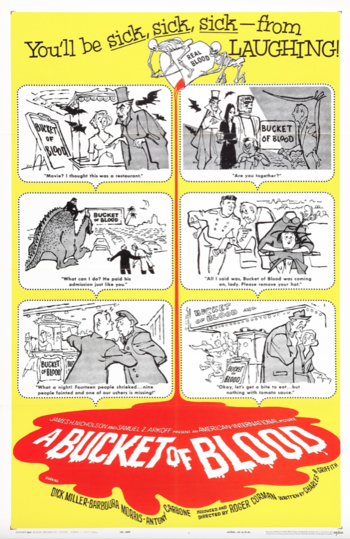 A Bucket of Blood is a 1959 comedy horror film directed by Roger Corman and written by Charles Griffith.

Walter (Dick Miller, aka that guy from Gremlins and Demon Knight) is a waiter at a beatnik restaurant who wants to be in on the scene but is a total dork. One day, he accidentally kills a cat with plaster and becomes a popular artist from the results. Eventually, he resorts to homicidal measures to keep his newfound fame.

The set for this movie was reused for Corman's next collaboration with Griffith, The Little Shop of Horrors.

Was remade in 1995 with Anthony Michael Hall as Walter under the direction of Mad TV's Michael McDonald, and got a musical adaptation in 2009.

This film contains examples of;