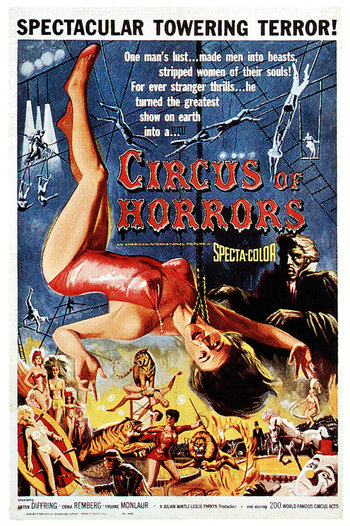 In 1940s England, Dr. Rossiter (Anton Diffring) is a plastic surgeon wanted by the police after an operation goes hideously wrong. However, believing himself to have brilliant abilities as a surgeon, he and his assistants (Kenneth Griffith and Jane Hylton) evade capture and escape to the Continent. There Rossiter changes his name to Schüler, and befriends a circus owner (Donald Pleasence) on whose deformed daughter Nicole (played by Carla Challoner as a child, Yvonne Monlaur as an adult) he operates.

Schüler manipulates his way into running the circus, taking it over when the owner dies in a "freak accident". A decade later, he is running an internationally successful circus, which he uses as a front for his surgical exploits. He befriends deformed women and transforms them for his "Temple of Beauty". However, when they threaten to leave, they meet with mysterious accidents which raise the suspicions of local police (Conrad Phillips among them), who are soon on his trail.

Tropes used in Circus of Horror: