Film / Grave of the Vampire 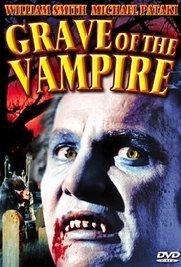 Grave of the Vampire is a 1972 horror film directed by John Hayes.

A vampire awakens from a lengthy slumber. Meanwhile, a young couple are making out nearby. The vamp kills the man and rapes the woman. She bears his son, who hunts his dad down for revenge.