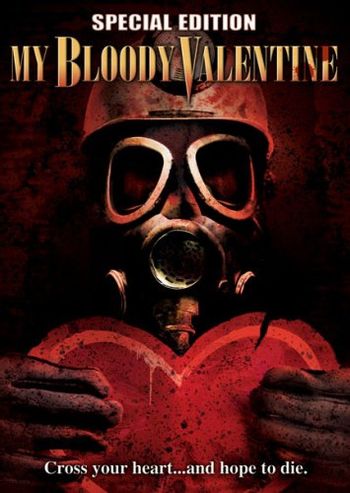 "Once upon a time
On a sad Valentine
In a place known as Hanniger Mine
A legend began
Every woman and man
Would always remember the time
And those who remain
Were never the same
You could see the fear in their eyes
Once every year
As the 14th draws near
There's a hush all over the town
For the legend they say
On a Valentine's Day
Is a curse that'll live on and on"
— "The Ballad of Harry Warden"
Advertisement:

Twenty years ago, in the sleepy mining town of Valentine Bluffs, a methane gas explosion at Hanniger Coal Mine trapped five miners in a shaft when the foremen who were supposed to be supervising left to go to a Valentine's Day party (similar to the absentee camp counselors in Friday the 13th (1980)). Six weeks later, the accident's sole survivor, Harry Warden, was rescued; he survived by eating his dead coworkers and ultimately had gone mad. After a year in a mental institution, he escaped on Valentine's Day, killing and cutting out the heart of the guilty foremen, leaving a warning that the same would happen if the town ever again held a Valentine's Day celebration. With this nothing but a distant memory and Harry supposedly back in the institution, the town is now throwing another party. Murders of the same manner as before start cropping up, and the town sheriff (Don Francks) orders the party shut down. But the requisite bunch of none-too-bright young adults ain't happy about this and elope to host the party in secret up at the mine instead. Big mistake...

Known for having nine minutes constituting the gorier killings lopped off of it to comply with the MPAA. In 2009, the movie had a remake in 3D, named aptly: My Bloody Valentine 3D. The remake coincided with a DVD release of the original movie, which had the cut footage reincluded.

Quentin Tarantino said that this is his favorite Slasher Movie.

Not to be confused with the famous Shoegazing band of the same name who may or may not have taken their name from this movie.

The original film provides examples of the following tropes: