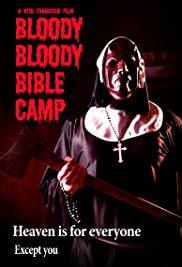 Heaven is for everyone. Except you.
Advertisement:

In 1977, a group of rowdy teens committed many sins of the flesh while attending a Bible camp. A nun, Sister Mary Chopper, went Ax-Crazy and killed them all before vanishing. Now, it's 1984, and more backsliding Christians are attempting to renovate the camp. However, ghosts from the past don't stay dead for long as Chopper comes back, axe in hand, to bring holy vengeance.