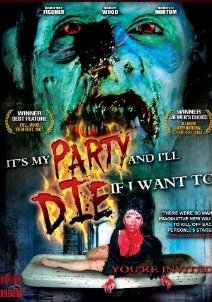 It's My Party and I'll Die If I Want To is a 2007 Slasher Movie directed by Tony Wash.

Sara is turning 18. Her friends are throwing her a party in Burkitt Manor. Here's the problem: Burkitt Manor is haunted. Seventy years ago, Jacob Burkitt murdered his entire family then killed himself. Now their ghosts haunt the house, and start to kill all of Sara's friends.