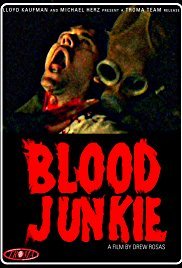 Laura is a teenage girl stuck babysitting her brother while her parents are gone for a weekend. Bored out of her skull, she bribes the boy to not tell while she takes him camping with her friends. Everybody is having fun, there's just one problem. You see, in a nearby abandoned building, a killer stalks. A killer who injects blood like it's heroin...