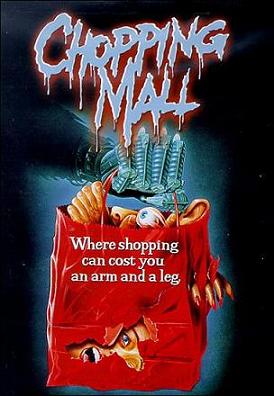 Have a nice day.
Advertisement:

Eight teenagers get locked inside a mall and think they're in for a night of debauchery. The mall also has a shiny new robot security system. The creator of the system says "nothing could go wrong". Things go less than stellar.

Thanks to a lightning strike on the mall's transformer, the computer running the security robots begins to malfunction, deciding all humans in the mall are intruders and in need of removal with extreme prejudice. This leads to a running Stern Chase throughout the shopping center as the humans try to evade detection and destroy the robots.

A classic Roger Corman B-Movie from The '80s, which has gained a cult following due to its hokey plot, tongue-in-cheek dialogue and gruesome robot kill scenes. Also known as Killbots, the film's original working title, used when it was syndicated to television.

Tropes seen in Chopping Mall include: