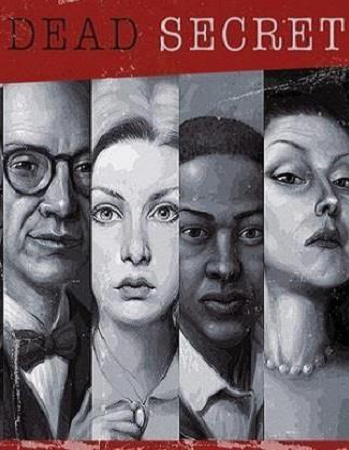 Dead Secret is a Point-and-Click Game with horror themes, developed by Robot Invader and released for PC through Steam in 2016.

Kansas, 1965. When the body of Professor Harris Bullard is found dead in his home, it's ruled to be due to natural causes and his ex-wife inherits the estate.

Wanting some gossip on the scandalous rumors surrounding the professor and his young, live-in assistant, reporter Patricia Gable is sent to the scene of the crime by her supervisor. But she is intent on taking this story seriously and proving her gut instinct that Harris Bullard's death was actually a murder.

While investigating the house, she finds out more about the professor and his research on neuroscience and also begins to get stalked by a Japanese demon-masked stalker...

The game was ported to PlayStation 4 in 2018. A sequel, Dead Secret Circle, was released in 2018, continuing the adventures of Patricia Gable as she investigates another mysterious case, while also dealing with returning echos from the Bullard affair.