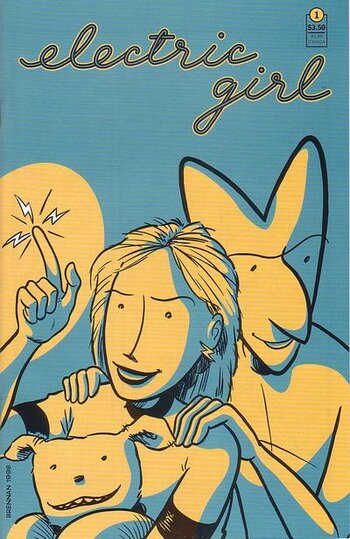 Electric Girl is an independently published comic written and illustrated by Michael Brennan. The comic stars a number of characters created by Micheal Brennan throughout his career. The first originally part of a series of jokes among his roommates at the Massachusetts College of Art, was a dog Blammo, made following a failed attempt to introduce a puppy to the dorm. Other characters were created later such as Oogleeoog, part of a failed submission to comic distributors and finally the eponymous Electric Girl.

The plot of the comic follows Virgina (Electric Girl) going through her daily teenage life while being perpetually harassed by the gremlin Oogleeoog. The story follows these humorous escapades, between interactions with Virgina's parents and friends and other issues arising in her life.

Though the precursors to Electric Girl were all rejected by mainstream publishers the self-published series has gone on to be nominated for Eisner Award as well as named in Popular Paperbacks for Young Adults list by the Young Adult Library Services Association.