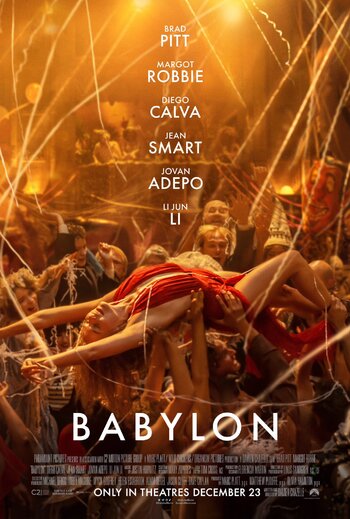 Always make a scene.
"You know what we have to do? We have to redefine the form, map those dreams, and print them into history. Look up and say: Eureka! I am not alone."
— Jack Conrad
Advertisement:

Babylon (2022) is an epic period comedy-drama film about the early days of Hollywood. It was directed and written by Damien Chazelle and features an ensemble cast.

The film begins at a debaucherous party in 1926 Hollywood and follows the lives of several attendees over the subsequent years as the industry transitions to sound films: aspiring actress Nellie LaRoy (Margot Robbie) is abruptly shoved in the spotlight and struggles to maintain her fame; aging movie star Jack Conrad (Brad Pitt) wonders if his days of relevance are over; and spunky Mexican-American assistant Manny Torres (Diego Calva) rises through the studio system.

Babylon had its world premiere on December 15th in Los Angeles and was released on December 23rd, 2022.

"And now, y'all ready for something different?"