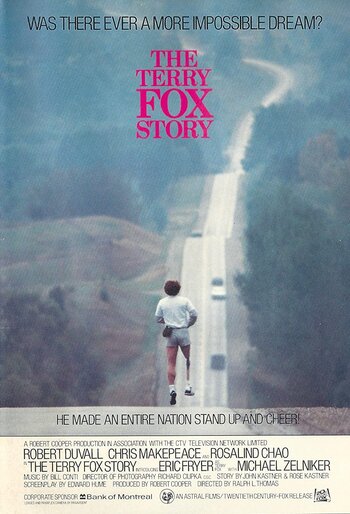 Terry Fox (Fryer), an aspiring young Canadian athlete, loses his right leg to bone cancer, putting his sporting career to a sudden and tragic halt. After a lengthy period of self-reflection and a romance with teacher Rike Noda (Chao), Terry dips his artificial leg into the Atlantic and sets off on his Marathon of Hope to raise awareness and funding for cancer research. Terry is accompanied on his journey by his friend Doug Alward (Zelniker) and his publicist Bill Vigars (Duvall). As the nation watches, Terry hobbles his way into Toronto, where he is hailed as a national hero. Despite his immense determination, however, Terry's cancer eventually relapses, and he is forced to discontinue the marathon, but not before making an entire nation stand up and cheer.

The film was produced by HBO in association with Canadian financiers. Bill Conti composed the film's score. It was the first television film created for a cable network, although it was released theatrically in Canada and the UK. The film won six awards at the 1984 Genie Awardsnote Canada's version of the Oscars, now known as the Canadian Screen Awards ceremony, including Best Picture.