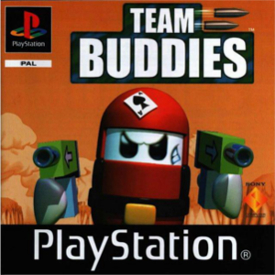 You looking at me? I'll smash yer face in!
Advertisement:

Team Buddies is a 2000 video game made for the PlayStation by Psygnosis, a top down shooter with light RTS elements. The main gameplay element is the collecting, stacking, and destroying of crates. Each team starts out at its base, has to run to the crate drop area, pick up a crate, run back and deposit it on its 2×2×2 stacking pad. Rinse, lather, and repeat. Different weapons, vehicles and team members are created through differing combinations of crates on different levels. For example, in the first world, you get your basic soldier (Infantry) and Commando.

In later worlds, you get ninjas, medics, and a whole range of other fun things. In the story mode, you have a number of different worlds, each with its own theme. The multiplayer mode has a few different game types: the basic Deathmatch, Domination and Capture the Flag, along with a unique mode called Bomball.

Tropes used in Team Buddies include: