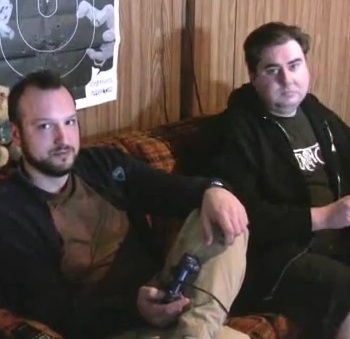 "Look at this guy! He's got the face of sales!"
"Get ready to throw the rest of your life away, because Vinny's spending the rest of his playing Persona 4, and he's inviting you to watch."
— Jeff Gerstmann
Advertisement:

The Let's Play of Persona 4, as played by Jeff Gerstmann and Vinny Caravella of GiantBomb.com.

As the story goes, Jeff bought Persona 4 while the Giant Bomb staff were on break, but soon realised he would never be able to finish it in his spare time. The tale nearly ends there, until the day Jeff decided to ask Vinny to review the game, an offer which Vinny countered with "Why don't we play the game in the office, and record it?" to which Jeff's reaction was, reportedly, "What?".

So began the legendary adventures of high-school student Charlie Tunoku, shadow-slayer and ladykiller, as he searches for the truth behind a multiple murder case taking place in the sleepy country town of Inaba. Along the way he'll get jobs, pass tests, make friends, and cast Bufu on things he shouldn't, all accompanied by the MST3K-esque commentary of Jeff and Vinny.

Here's the link to the episodes