The artist, known as Gigi Digi (formerly Peachifruit), has done several comics, which have gained much fame on a certain website. Their comics cover Metal Gear, Professor Layton, Super Mario Galaxy, The Legend of Zelda, Persona 3, Persona 4, and Ace Attorney (and sometimes, Mother 3).

Here is an archive

of some of the Hiimdaisy comics. It is actually pretty much the only way you can read it now, considering the accounts in which the comic was originally hosted all got deleted.

Some of the comics have been adapted into "hyperdubs" by BroadSpectrumStudios,

with voice-overs, sound effects and original jokes added. The comic no longer updates, as the author started working on their new original web comic, Cucumber Quest, and has stated they have no interest in continuing the comic. Now that Cucumber Quest has been put on indefinite hiatus, Gigi Digi is "pursuing other things."

Introduction over and we need to post examples! Snake, get in there!

Okay! Time to add some examples of tropes in this web com- *bleep bleep* OH WHAT NOW?!

This page coming to an end at this point? That's not what it was designed for! 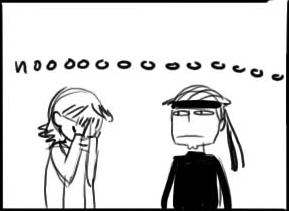