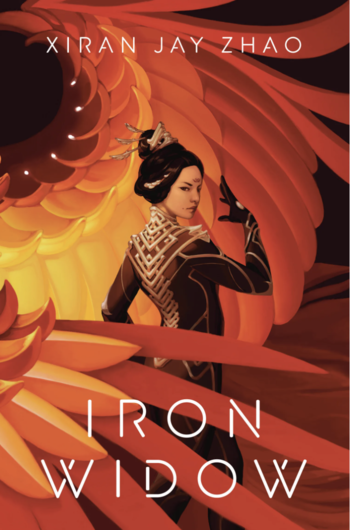 You've been living a dream for long enough. Welcome to your nightmare!
Advertisement:

Iron Widow is the debut novel of Xiran Jay Zhao, and was released on September 21, 2021.

Set in the land of Huaxia, boys and girls are paired in giant magical mecha to fight the robot aliens from beyond the Great Wall. The male pilots get glory and are treated like celebrities, while female pilots are seen as disposable and often die from the strain.

The main character is Zetian, a young woman who offers herself as a concubine-pilot for the revenge of her sister's death in the patriarchal military system. As a result of killing the boy responsible for the death of her sister, she is called an Iron Widow, a feared female pilot who can power up Chrysalises by sacrificing the male pilot. In an attempt to tame her, she is paired up with the controversial Li Shimin. But Zetian refuses to back down, and will continue her fight.

The sequel, Iron Widow 2: Heavenly Tyrant, will be released in spring 2023.

On September 22, 2022, it was announced that Iron Widow would receive a film adaptation. Xiran themself was consulted and approves of the project