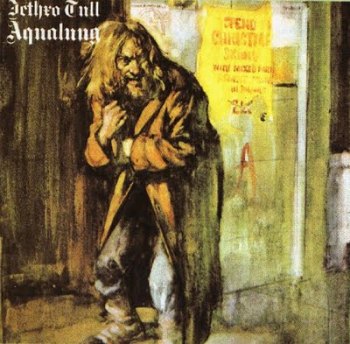 How do you dare tell me that I'm my Father's son
When that was just an accident of Birth
I'd rather look around me — compose a better song
`Cos that's the honest measure of my worth.
— "Wind-Up"
Advertisement:

Aqualung is the fourth studio album by Jethro Tull, released in 1971. It is their final album to feature drummer Clive Bunker, the first without bassist Glenn Cornick and the first with bassist Jeffrey Hammond-Hammond and keyboardist John Evan, the latter of which appeared on Benefit as an unofficial member. It is best known for the eponymous hit single "Aqualung". Other well-known tracks include "Cross-Eyed Mary" and "Locomotive Breath".

"And the tropes bloom like madness in the spring":