Close Rick-counters of the Rick Kind 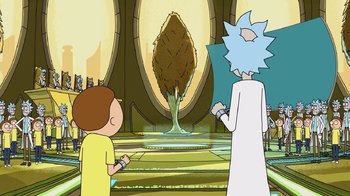 "This place is a real who's who of who's you and me."
Written by: Ryan Ridley
Directed by: Stephen Sandoval
"Rick Sanchez of Earth dimension C-137, you are under arrest for crimes against alternate Ricks by the authority of the trans-dimensional council of Ricks."
— Council of Ricks Officer

Rick has a run in with alternate Ricks, resulting in a falling out with Morty.

"Hey, Morty, you want connection, go be part of some stupid club, like all those dumb Ricks. You know, maybe I don't connect because I'm the Rickest Rick there is. And, you know, it would g-go without saying that the Rickest Rick would have the Mortyest Morty."