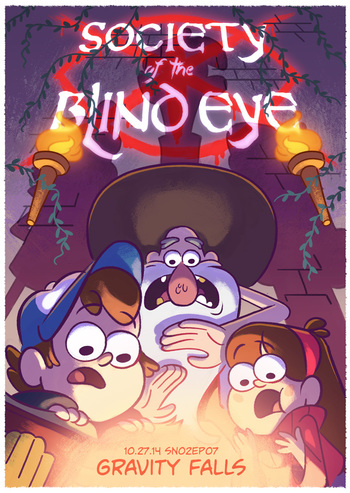 Unsee what you saw.

One night while closing up Greasy's, Lazy Susan spots a group of gnomes. Before she can report this discovery, she is taken away by a group of mysterious, hooded men, who pronounce, "It is unseen."

The next day, the Pines Twins are in a slump; Mabel has learned that her merman crush Mermando is arranged to be married to a sea manatee queen, another reminder that all of her attempts at a summer romance have failed. Dipper, meanwhile, feels that his search for the Author of Journal 3 has hit a standstill, what with the destruction of the laptop at Bill Cipher's hands. However, Mabel notices a manufacture's label on one of the chips- McGucket Labs?! It couldn't be! But, after adding up multiple subtle clues, Dipper realizes that Old Man McGucket must have written the Journals!

Taking Soos and Wendy along for the ride, the gang confronts the local kook. McGucket, however, can't remember anything beyond thirty years ago. Trying to jog his memories, Dipper shows him Journal 3, and an entry on hooded men called Blind Eye spurs a Freak Out from McGucket. Concluding that this "Blind Eye" must have tampered with McGucket's memories, the gang takes him to the place of his earliest memory- the Gravity Falls history museum. There, they discover a series of hidden chambers, and witness the hooded men erase Lazy Susan's memories of the gnomes with a ray gun, sending the encapsulated recollections through a pneumatic tube. Dipper, Soos, and McGucket follow the tube while the girls stand guard. There, Mabel considers using the ray to forget her failed romances. The men find a chamber full of memory capsules coming from people in town, but removingMcGucket's triggers an alarm. The hooded men capture the kids, while McGucket slips away in the confusion.

The hooded ones reveal themselves to be townspeople, such as Toby Determined, Bud Gleeful, and that guy who married a woodpecker last Pioneer Day. Led by the enigmatic Blind Ivan, they are the Society of the Blind Eye, an order dedicated to removing all memories of Gravity Falls' supernatural weirdness so the rest of the town can live in blissful ignorance. And now, they plan to remove the gang's memories of everything they've seen this summer. But before Ivan can fire the ray, Old Man McGucket leaps in to the rescue, having raided the miner's exhibit for weapons. A battle for McGucket's memories ensues, and when Blind Ivan tries to fire the ray again, McGucket takes the shot, showing no ill effects as his mind is too warped to be damaged. "Take your best shot, baldie! But my mind's been gone for thirty-odd years! You can't break what's already broken!" The Society is defeated, and Dipper uses the memory ray to erase the members' own memories of being part of it. After sending them off (And giving Blind Ivan a new identity), the gang examines McGucket's memories.

"My name is Fiddleford Hadron McGucket, and I wish to unsee what I have seen."

McGucket once helped a visiting researcher document Gravity Falls' weirdness, culminating in the creation of a machine that would benefit mankind. But something went wrong, and so McGucket abandoned the project, going as far as to invent the memory ray to make him forget what he had seen. He then formed the Society of the Blind Eye to help others with troubled memories, but overuse of the ray on his own problems caused him to degenerate into the local kook he is today.

Although the revelation is stunning, McGucket is happy to know who he used to be. Now, he can move on and recover. Mabel, for her part, decides that she should learn from her failed romances than tyring to deny they happened. Dipper asks if McGucket remembers who the Author was, but the Old Man will need to time remember fully.

Underneath the Mystery Shack, the Universe Portal has increased in strength—it's now starting to pull things in. But in spite of the dangers, Stan refuses to give up on his plans. "I don't care if it's dangerous. I don't care how long it takes. I'm gonna pull this off, and no one's gonna get in my way!"