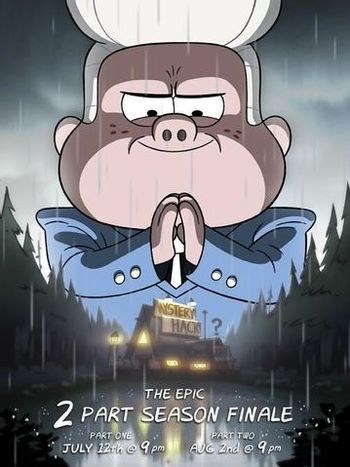 "I finally won this time!"

Part 2 of the season 1 finale.

When we last saw the gang, Gideon has taken over the Mystery Shack and blasted it with a wrecking ball. Since then, the Pines family has been staying at Soos' Grandma's house. At a press conference, Gideon announces his intentions to turn the Mystery Shack into his own personal theme park, Gideonland. The Pines' try to out Gideon as evil, but the rest of the town are too caught up in Gideon's charm to pay them heed. When he realizes there's nothing else he can do, Grunkle Stan gives up and decides to send the twins back home.

Meanwhile, Gideon reveals to his father why he wanted the Mystery Shack; whoever wrote the journals discovered secrets too powerful for one man, and so hid the journals to protect them. If both journals are brought together the ultimate power would be unleashed. Gideon believes that the other journal is somewhere on the Mystery Shack property. Dipper and Mabel try to take the deed back with help from the gnomes, but Gideon is able to turn the little men against the Pines twins with his dog whistle. During the struggle Dipper's journal is taken by Gideon, who thinks he has what he's been searching for. Defeated and demoralized, the twins take the next bus out of town. Stan, having hit rock bottom, wonders how Gideon always seems to be one step ahead. His hearing aid acts up and the old man has a realization.

Back at the Shack, Gideon takes a closer look at Dipper's journal and sees that it's actually #3. Thinking Dipper must have the first journal, Gideon activates his Gideonland statue (Actually a giant robot built by Old Man McGucket) and chases the twins' bus down. Gideon demands Dipper hand over Journal #1, but Dipper has no idea what he's talking about, so Gideon takes Mabel to be his queen. This is the last straw, and Dipper throws himself into Gideon's cockpit and fights Gideon. The battle sends the robot off a cliff, and the twins are able to survive the fall thanks to Mabel's grappling hook. The townspeople gather at the crash site, and Gideon claims that the twins blew up his statue. Before the police arrest Dipper and Mabel, Stan shows up to reveal the truth; Gideon's so-called 'psychic visions' are actually from a surveillance system he uses to monitor Gravity Falls; all his Li'l Gideon pins are cameras, whose feeds he gleans information on the town. Gideon is arrested, but before he's hauled off Stan shakes him down for the deed (and discreetly snatches Journal #2 as well). "The Mystery Shack is back, baby!"

After rebuilding the Shack and settling back in, the twins show Stan their journal, explaining that Gideon was after it. Stan laughs them off, but takes the journal claiming he wants to create new attractions with it. Dipper is upset at this, but Mabel assures him he'll get it back; what could an old man like Stan do with the journal?

That night, Stan enters his vending machine passageway and takes an elevator into a mysterious room full of computers. Reaching a desk, he pulls out another journal...1. "After all these years...finally, I have them all." With journals 1, 2, and 3, Stan activates a strange machine...