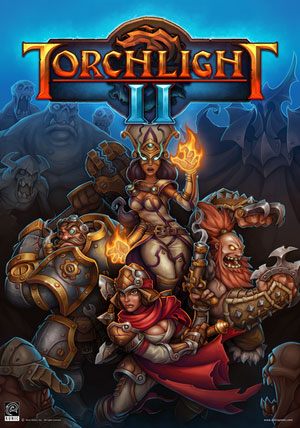 The playable classes, clockwise from the top: Embermage, Berserker, Outlander and Engineer.
Torchlight II is a 2012 Action RPG developed by Runic Games. As you might infer, it is the direct sequel to Torchlight, and the predecessor to Torchlight III. It adds Co-Op Multiplayer to the franchise (a lack of which was a near-universal criticism of the original, especially since Diablo II was doing it a decade ago) and is meant to serve as a stepping-stone towards the proposed Torchlight MMO. The playable classes include:
Advertisement:
Advertisement:

Originally meant to be out in Spring of 2011, it faced some delays, but it finally came out in September 20, 2012. It was so popular that it actually crashed the registration servers on launch day, causing some tongue-in-cheek comparisons with the launch of another big Action-RPG.

A fair share of the original's gameplay-related tropes still apply, but a lot of new features and mechanics make debut here, so be sure to list the new stuff on this page. Also, beware of some unmarked Late Arrival Spoilers.