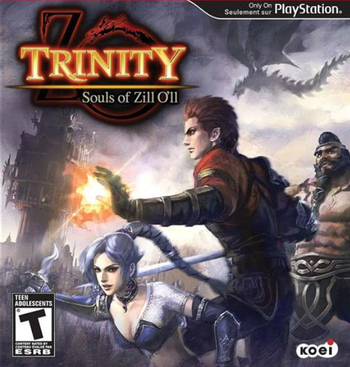 Trinity: Souls of Zill O'll is an Action RPG from Koei Tecmo, released in 2010-2011 for Playstation 3. In it, the leader of the country Rostorl has challenged the leader of Dyneskal for the right of the throne. However, Rostorl loses the war and Dyneskal reigns supreme. King Balor, the ruler of Dyneskal, uses the victory to expand his country's respective borders and conquers the mighty cities — Ancient and Rocen. Chancellor Zofor then proclaims a prophesy that King Balor will die by the hands of his own offspring.
Advertisement:

During the Dyneskal-Rostorl War, a boy loses his father and runs with his mother away from the chaos. He is named Areus, a half-elf who spends his childhood living quietly in the forest. Having suffered discrimination for his mixed heritage, he hardened his heart and followed the advice of his sword instructor, Darqin. Nineteen years later, Areus accepts his master's sword to become a gladiator in the popular city of commerce, Liberdam. With his fellow comrade and friend, Dorado, Areus aims to become the best gladiator of the age.