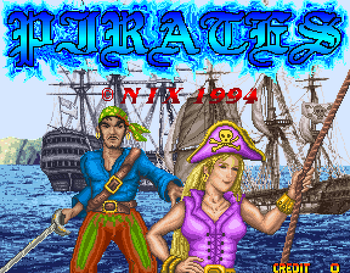 Talk about Exactly What It Says on the Tin.
Advertisement:

Pirates is 1994 arcade game made by NIX, a Spanish company and a Cabal clone - set in The Golden Age of Piracy.

You are a pirate and an adventurer in the 16th century, learning from an old seadog of a legend revolving around a cave filled with gold and booty, left behind and forgotten by another pirate lord decades ago. Alas, the seadog forgot in which island is the cavern located, but managed to produce three maps from his seafaring days for your adventure. You then set off to find the treasure, but ends up knee-deep in hostile territory owned by rival pirate enemies as you travel to the islands of La Isabea, Papeete, and Shetland in search for clues.

Gameplay-wise, Pirates is seen from a behind-the-back perspective throughout, with a crosshair indicating where your shots will hit as you control your character in avoiding bullets and projectiles. You spend the game dodging bullets, arrows, the occasional cannonballs (though this one can be shot to bits before they hit you) and can obtain cannons of your own to blow up large amount of enemies or deal greater damage on bosses.

The game was never ported to the NES or other gaming platforms for reasons unknown, though there are certain downloadable ports available for computers.