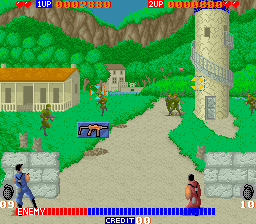 You know what to do, soldier. Blow those damn buildings up with the enemy!
Advertisement:

Cabal is a 1988 Arcade Game developed by TAD Corporation. In this game, the player controls a commando, viewed from behind, trying to destroy various enemy military bases. Two players could play this game, cooperatively, simultaneously.

The player's character is seen from behind and initially starts behind a protective wall. The player has a gun with unlimited ammunition and a limited number of grenades. An enemy gauge at the bottom of the screen depletes as foes are destroyed and certain structures are brought down. Once it is depleted, you beat the level. All the remaining buildings onscreen collapse and the player progresses to the next stage while doing a rather... odd-looking Victory Dance while running.

Is not related in any way to CABAL Online, an MMORPG released in 2005.