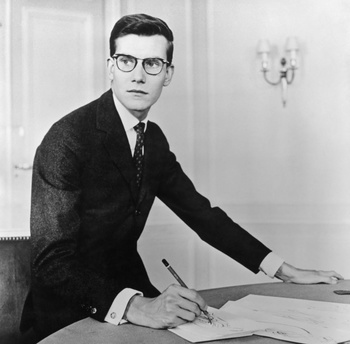 He was most notable for bringing the mod streetwear of The '60s into the world of haute couture. His revolutionary designs include a shift dress inspired by Mondrian paintings, the women's tuxedo, and the women's pantsuit. Although Coco Chanel had popularized high-fashion pants for women and pantsuits had been present in other collections, Saint Laurent's Le Smoking women's tuxedo brought traditionally masculine styles for women to the mainstream and were widely copied.

His eponymous fashion house was the first major Parisian house to release a ready-to-wear collection, bringing high fashion to the masses and making Saint Laurent wealthy. He was a fixture of the jet-set of the 1960s and 1970s, collecting art, homes, and partying with celebrities (he was a regular of Andy Warhol's Factory, among others).

Along with his lover and business partner, Pierre Bergé, Saint Laurent founded his fashion house in 1961, when he was only 24 years old. Prior to that, he had been the Creative Director of Christian Dior, a position he was promoted into at age 21, after Dior's sudden death. Saint Laurent retired in 2002 and passed away in 2008 from brain cancer, but the brand continues to be a global success. Saint Laurent's couture house in Paris is now a museum that is open to the public.

He had many female muses over the course of his career, including Catherine Deneuve, Victoire Doutreleau, Talitha Pol Getty, Betty Catroux and Loulou de la Falaise.