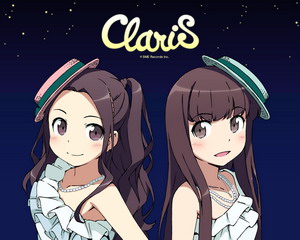 Clara and Alice
ClariS (formerly known as Clara Alice) is a female J-pop duo. Originally they posted covers of songs in Nico Nico Douga since 2009, but their voices attracted the attention of Vocaloid music producer kz, who wrote a few songs for them. In 2010 they became major and their first single "irony" was used as the opening for Oreimo. Since then, their popularity has grown significantly, spawning even their own Nendoroid figures.
Advertisement:

One characteristic of this group is that their members have never revealed their real names or faces to the public, as they were minors when they started out, and even now they continue to stay out of the public eye so they can focus on their studies. Thus, in their singles they're represented by illustrations by popular anime artists (the one pictured at the left was drawn by Hiro Kanzaki, the artist for Oreimo, for "irony"'s cover).

In 2014 Alice left the duo to focus on her studies, being replaced by a new vocalist called Karen.