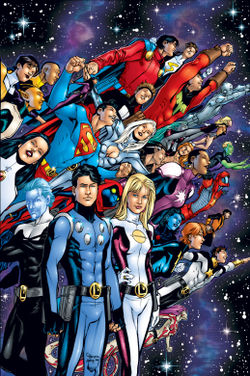 Eventually, Keith Giffen took over the book, along with fans-turned-writers Tom and Mary Bierbaum, and the series really jumped into the Dark Age with the "Five Years Later" Time Skip. Earth is ruled by alien invaders. One character was retconned into an Applied Phlebotinum transgender person, and another into a shapeshifter who only thought he was the character. The Legion are actually clones — unless the other, younger Legion (Batch SW6) that were discovered in People Jars are the clones, as one might think at first. The moon was destroyed, followed by the Earth itself.

As part of the DC Rebirth initiative, the Legion were teased by creators and Saturn Girl made some brief appearances. It was later confirmed that there would be a new Legion ongoing, and even later Word Of God said that the Batman ongoing (where Saturn Girl briefly appeared) would lead into the Legion's return. After years of teasing, the Legion makes their return in Superman (Brian Michael Bendis) #14, this time as yet another new iteration hailing from the 32nd century, with Jonathan Samuel Kent (the modern day Superboy and son of Superman) joining the group due to the crucial role he played in the establishment of the United Planets. This was followed by a two-issue miniseries called Legion of Super-Heroes: Millennium, featuring highlights of the thousand years between the DCU's present day and the Legion's era as seen through the eyes of immortal character Rose and Thorn. A new Legion of Super-Heroes ongoing series followed, with Jon Kent as its point-of-view character.

Comic books, solo series, stories and storylines featuring the "retroboot" Legionnote based on the original version up to Crisis on Infinite Earths, first appearing as guest stars in Superman-related comics since 2007, confusingly overlapping the threeboot: