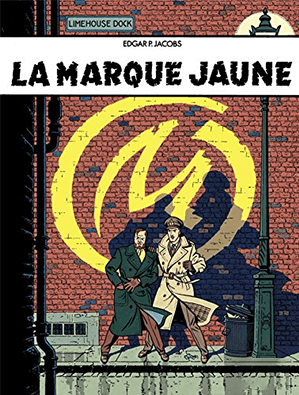 The Yellow "M" is the sixth album in the Belgian Comics series Blake and Mortimer, and possibly the most iconic in the franchise. It's praised for its story and art work and hailed as a landmark in the history of Franco-Belgian Comics. In 1999 it was named the Best Comic Strip Album of All Time by European comic strip critics.

The plot revolves around a mysterious villain who terrorized London by informing the press in advance of his robberies. As a signature he leaves an M in a yellow circle behind. When the Imperial State Crown is stolen from the Tower Of London Blake and Mortimer are put on the case...

The album cover in itself has become a Stock Parody and Stock Pose in European comics and has been referenced and spoofed so much that it has its own section in the series' "Referenced By..." page.